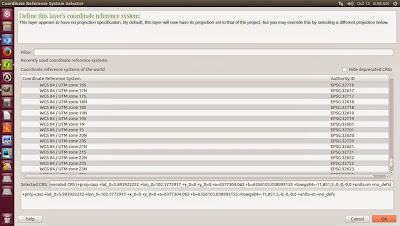 The deeper I go into coordinate reference system (CRS) the more I start to question whether I am using the right one because accuracy is the name of the game when it concerns GIS data. Goggling here and there, I realized Malaysia itself uses 4 UTM Zone reference. If a map was prepared using the familiar WGS84 with the Authority ID:4326, things would be simple but what happened if the required map prepared by a third party set on finer specifications, how now? If the user who receives that map was unaware that the CRS was not really WGS84 but a combination of WGS84 and UTM zone, then, the user will never get the CRS accurately configured. Don't believe me, look up the CRS under the CRS Selector and find:

From the Internet UTM image I found, (I may be slightly off), that certain states overlap with the CRS that concerns UTM zones so this makes it more complicated:

You will start to appreciate this information when if you are required to convert GPS data from long-lat references to GIS references because the right CRS is crucial if you want to get your coordinates right. When I contacted JUPEM, I was told the CRS they use is either RSO or Cassini Soldner, all this makes it more challenging. I'm still muddling through this subject which is not my field but the purview of surveyors.
Posted by badaveil at 12:00 am