Since I pensioned in 2015, I hardly ventured into QGIS because of my personal obligations and commitments, furthermore, I noticed my services in this specialized field were not required anymore both from the public and private sector.
I still do update myself on QGIS once-in-a-while like I am now aware Quantum GIS is now officially called "QGIS". They also changed their logo to a more attractive modern design, the number of QGIS plugins has much increased and they have made newer release more user-friendly than before.
I also note Open Source Software has developed rapidly over the recent years as it is being more exposed and is becoming more popular as potential users become more open and welcoming. Even I migrated from my favourite Ubuntu to Linux Mint as my main desktop operating system whilst I use a dual boot OS system. (Wifey still requires Windows for her work).
UPDATE: 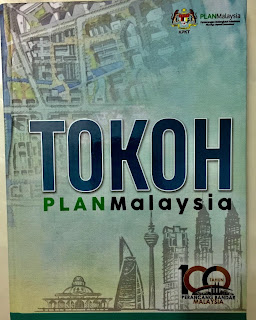 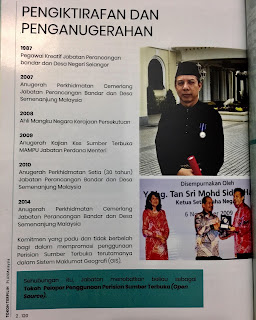 7 years after I pensioned, in January 2022, I received the above half-an-inch A4 document from my old department which it too had rebranded itself as "PLANMalaysia". In commemoration of its 100th year existence in November 2021, that document which highlights the department's figureheads over the past 100 years was initiated. It contains 2 sections: firstly, the 13 Director-Generals who had and still serve the department until today, secondly, 9 selected figureheads which had shaped development of town planning in their respective interest, of which I was surprised but greatly honored to be one of them  where I was officially endorsed by the department as the "Pioneer in the use of Open Source Software". Sometimes, one only gets to see what destiny holds after one has retired from government service. Ah well, another feather to my cap.
Posted by badaveil at 6:10 pm 38 comments: